Are you in need of a freelance writer or blogger? Sorry, I’m easing into retirement and not taking on new projects, but wish you luck.

I’m Cheryl and I’m a freelance writer near Vancouver, British Columbia. Specifically, I’m a Surrey freelance writer because that’s where I live, and getting right down to it geographically, I live in a former rural area called Cloverdale. The farms have been largely replaced by new developments, but I cling to my country roots. 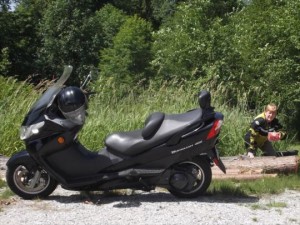 I’m a horsewoman, adventurer, and traveller. Sometimes I can be seen buzzing around town on my Suzuki Burgman. No biker chick here. Just call me Scooter Girl!

Ever since I was old enough to figure out a typewriter and the two finger hunt and peck typing method, I’ve been writing short stories and screenplays. I was thrilled when my first article about Standardbred racehorses having a second career as riding horses was published in the Gait Post. Since then I’ve had articles published in consumer and trade magazines. In 1999 I self-published my mother’s cookbook and told her story about Alzheimer’s Disease taking over our lives – Recipes my Mother Forgot…family style cooking and a caregiver’s guide to Alzheimer’s Disease. 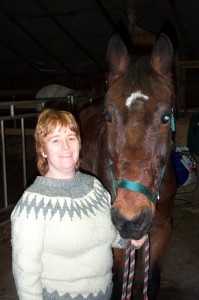 In 2002 I went to a horse auction and came home with a walking skeleton, a severely starved and abused Standardbred that I named Lucky. I wasn’t sure if this old racehorse was going to live through the night but years later he’s still with me, as sassy as ever at age 27. Lucky’s story was published in Hoof Beats magazine – Lucky Boy. Before I bought Lucky I already owned a gorgeous Appaloosa named Whistler who’s now 26 years old. You’d think he was still a young colt the way he comes flying up the hill at chow time. My other horse is Cajun, a mischievous Quarter Horse. His mother was a PMU mare who lost her job after the industry shut down 70% of the farms in 2003. 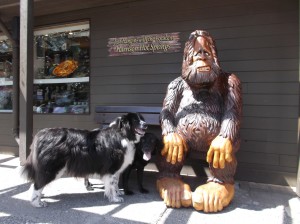 I’ve had many dogs over the years, always rescue dogs. I have a Black Lab named Chica who was previously owned by a 92 year old lady with Alzheimer’s Disease. After she went into full time care the family tried to place the dog in a new home and I brought her home. Chica was a little chubby wubby when I got her because the former owner forgot she’d already fed her and kept on feeding her. My other dog, Shadow, is a Border Collie crossed with something big that jumped the fence. She was picked up by the dog catcher in Yakima, Washington, a high kill shelter, and I saw her on Petfinder and knew this beautiful girl must come home with me. My dogs love car rides and going on adventures with me. 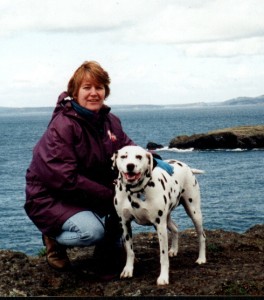 Over the years I’ve been involved in horse rescue and dog rescue, fostering and transport. At one time or another I’ve fostered all kinds of dogs in my home – Dalmatians, Labs, German Wirehaired Pointers, Weimaraners, and even the most gorgeous Munsterlander.

I had two novels published with the now defunct Musa Publishing – Ringer and Horseman Spell – and I’ve had the rights returned to me and they’re currently available on Amazon. Check out my books here.

Specialties: I have writing experience in many lifestyle and business sectors, including: real estate, office procedures, horses, dogs, travel, and personal finance. All my life experiences led to my dream job of being a freelance writer.